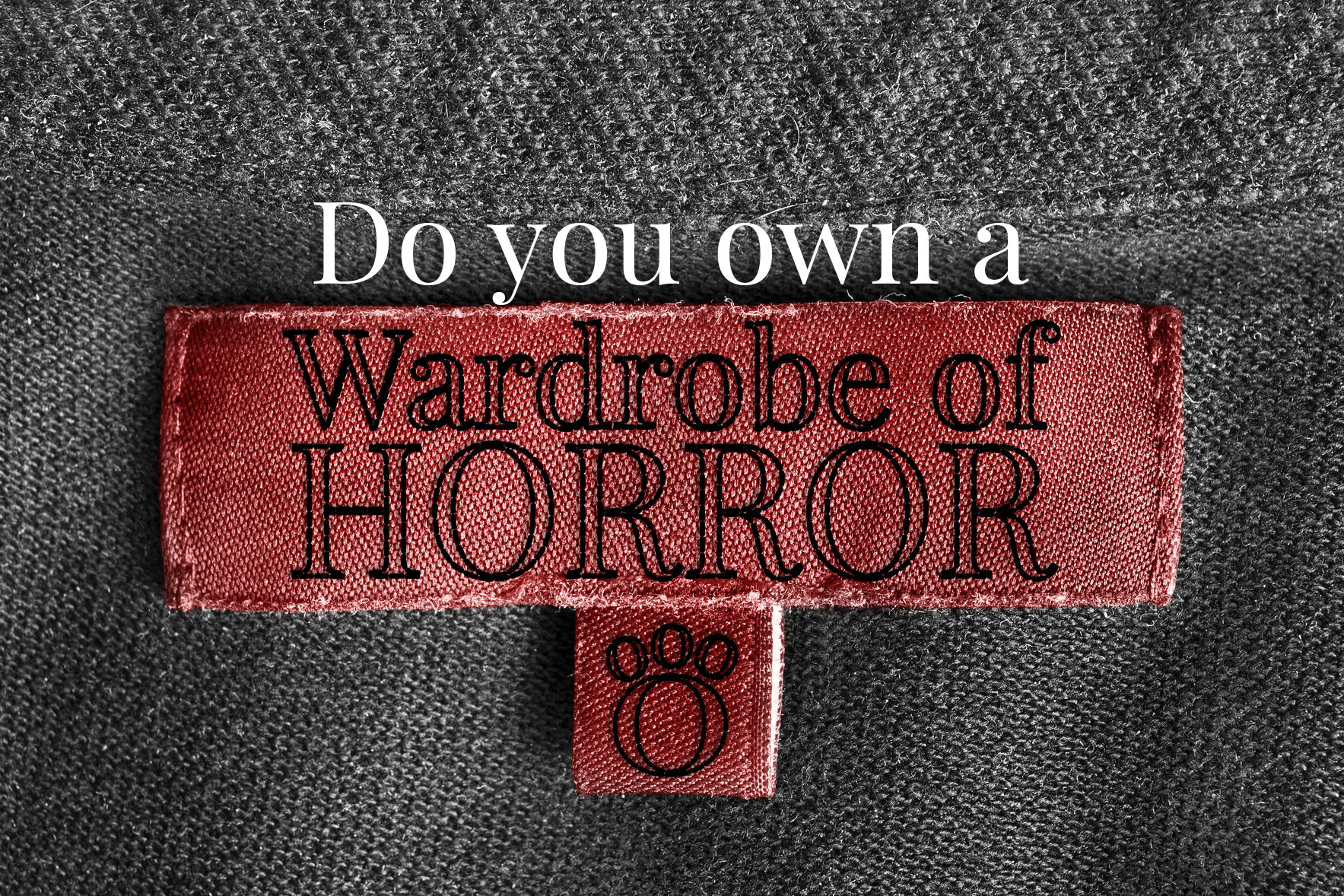 2019 is the Year of the Vegan. Greggs have kick started the first media uproar of the year with the release of their vegan sausage roll, and we hope that the press start taking note. Veganuary has seen a record breaking number of applicants, including friends of mine, who’ve decided to ditch the dairy and miss the meat for their new years resolution. Yet, as veganism is roaring in popularity, those who’re getting to grips with the ‘do’s and don’ts’ of their diet maybe unaware of the composition of their clothing. Compassion extends beyond the boundaries of the fridge and this article will help identify the hidden horrors around your wardrobe.

The obvious fabrics that spring to anyones mind are leather and wool, but what about those where the sources aren’t as recognisable. Let’s look into clothing labels and see what they really mean:

Silk is not luxury
SILK IS CRUELTY

Silk is a protein fibre that is typically harvested from the cocoons of larvae of the mulberry silkworm and their production isn’t a kind process. As the silkworms are pupating in their cocoons they are inserted into boiling water to allow the individual fibres to be extracted.

Keep a keen eye on your fabric labels as silk can often be a small percentage of the composition. It can also be found in furniture upholstery, rugs and beddings. Rayon/Viscose is a synthetic silk like fibre that is a great alternative.

Be aware of
WHAT YOU WEAR

Silk can be included in many other materials too such as:

Satin – Satin was originally made from silk and used for lingerie, blouses and dressing gowns. However, as technology has advanced and the environmental damage caused by silk production is becoming more unsustainable, satin is more commonly weaved using nylon or polyester. Vintage gowns and clothing may contain satin comprising of silk so it’s always worth keeping that in mind if you love to lose yourself in a vintage clothing store.

Charmeuse – A less well known material that can be made of silk derived satin or polyester. Charmeuse made from silk tends to be more expensive so keep an eye on the price tag if you’re unsure of the materials composition.

Chiffon – Similar to Charmeuse in the way that it can contain silk; Chiffon can also be manufactured using polyester.

Faille – Another potential for hidden silk, yet could be manufactured from cotton or other man-made fibres. Check with the manufacturer if you’re unsure.

Wool belongs to sheep
IT'S NOT OURS TO KEEP

Wool is fibre that can be sourced from numerous animals such as sheep, alpacas, bison, rabbits, goats, llamas. Wool covers a broad range of uses from clothing, carpets and upholstery and there is nothing luxurious about it’s harvest as the shearing or pulling of hair from these animals leaves them battered, bloodied and terrified.

This isn’t a gentle trip to the barbers for these animals, as undercover investigations reveal their struggle against the hands of man. Leaked footage shows sheep being starved with the desire to weaken them in the hope that they offer less resistance when being shorn. Tail docking, castration and amputation is often performed without anaesthetic to make the shearing process easier and convenient. When produced on a mass scale, angora wool is obtained by restraining the rabbit and ripping the fur from their skin or shaving them, often cutting and injuring them.

Merino is a type of wool from a particular breed of sheep that produces a thinner and softer wool. Merino Sheep are often subjected to mulesing, whereby the wool bearing skin around the buttocks is removed to prevent fly strike. This has been condemned by many animal rights groups as it causes immense pain and discomfort. Big brands such as H&M, ASOS and M&S have stopped stocking products consisting of Merino Wool whereby mulesing hasn’t been performed to the sheep. Merino is commonly found in jumpers, cardigans, suits, jacket fillings, shirts, gloves, hats, socks, scarves and so on.

There are many kinder alternatives to wool such as cotton, Tencel, flannel and polyester fleece.

You support abuse
IF YOU WEAR GOOSE

The vast proportion of down is plucked from live birds, most commonly domesticated geese. It’s a painful procedure that is terrifying for the birds, often leaving flesh wounds and injuries sustained from a struggle. Super cruel companies such as Canada Goose and Moncler are renowned for containing down in their composition along with real fur trims.

Commonly found in coats and jackets, down is also found in pillows, cushions, mattresses and sleeping bags so be sure to read the label before buying.

Leave animals in
THEIR OWN SKIN

One of the most prolific animal products that’s still in use today is fur. Often seen as a luxury product with a price tag to match, fur is sourced from farming animals, trapping or hunting them. It is the coat of an animal that is still attached to their skin most commonly extracted from wolves, foxes, dogs, cats, raccoons, minks, rabbits, seals and many others. When farmed, they can spend their lives in steel wire cages, cramped into filthy conditions being mistreated and terrified before facing the inevitable slaughter from electrocution, battery, clubbing, suffocating, drowning, gassing or poisoning. Some cases have exposed the animal still being conscious whilst being skinned alive.

Fur is finding its way onto UK markets, especially in the form of bobble hats on market stalls that claim to be faux fur with the customer being unaware of the composition. It’s no suprise that big brands and top designers are choosing to ditch fur from their product range as prolific pressure from their industries is creating less of a demand. Some brands are still standing firm with their cruelty as aforementioned with the notorious Canada Goose.

There are many incredible alternatives to fur so be sure that leave no excuse for choosing cruelty.

Let's stick together
& SAY NO TO LEATHER

Leather is the skin of various animals such as cows, pigs, crocodile, snakes and goats, to name a few. More often than not, leather is a product of cows and pigs being killed for meat, which in itself is extremely harmful to the environment. Add the tanning process of the leather into the mix and you’ve got a product that has scarred the Earth; all to allow humans to wear or use an animals skin.

The origin of leather used in many products is uncertain, with China and India being the largest exporters in the world. The animal welfare laws are extremely poor in developing countries, therefore the treatment of the animal prior to slaughter is grotesque and sadistic.

By purchasing leather you are directly supporting factory farming and slaughterhouses due to the skin being the most economically important co-product of the meat industry. With so many alternatives and clever initiatives such as Pinatex (leather made from Pineapples) there really is no excuse to continue supporting such a cruel and damaging industry.

Click here to check out our collection of stunning handbags that will turn heads for all of the right reasons.

Hi everyone! I'm Craig, part owner of Vegan Haven, and I've been vegan for around 5 years now. I'm really keen to share hints and tips in my blogs and ...